Discovery of the bodies of 20 Canadians soldiers

Confiscated at the time of the French Revolution, the Abbey was bought in 1791 by private owners, which eventually led to its being divided into three separate properties.

In 1943, the Huard family lives in the part that includes the Abbey church, the Lachcure family in the outbuildings and the Vico family dwells with their seven children at the monks’ farm.

Weapons that had been parachuted in by the Allies are stored at the part of the farm managed by one of the sons, Jacques Vico, assisted by his brother Jean-Marie.

M. Vico is arrested by the Gestapo: as the Mayor of the village he issues false identity cards to those who go into hiding/join the Resistance. He is deported to Mauthausen Concentration Camp.

Fearing a raid, Jacques and his brother, helped by other Resistance fighters, remove all the weapons during the night (weapons to be used during the liberation of Caen) and go underground, joining their brother Francis who was hiding to avoid the STO.

Jacqueline, the eldest sister, joins a Resistance group in Paris.

Informed of the arms cache on the grounds of the Abbey, the Gestapo arrives and arrests Mme Vico. From this point forward, the family is scattered and the farm is unoccupied.

Landing of the Canadian Troops.

Subsequent to their landing at Juno Beach, the Canadian Units, including the 3rd Canadian Infantry Division, the 2nd Armoured Brigade and the 1st Canadian Parachute Batalion (under the command of the 6th British Airborne Division) engage in heavy combat in the Authie/ Buron / Saint- Contest area . The combat is particularly deadly, notably because the troops gain ground only to lose it under pressure from the Wehrmacht. Finally the ground is definitively regained but at a high cost for the Canadian troops.

Opposite them, SS General Kurt Meyer: he choses to locate his Headquarters in the Abbey, an important and strategic site, since it was possible to see the whole plain, all the way to the sea, from the top of the church.

According to M. Huard who was then on the premises, many prisoners passed through the Abbey in transit. There were the wounded who were carted away and then there were the missing. The families were informed quickly. 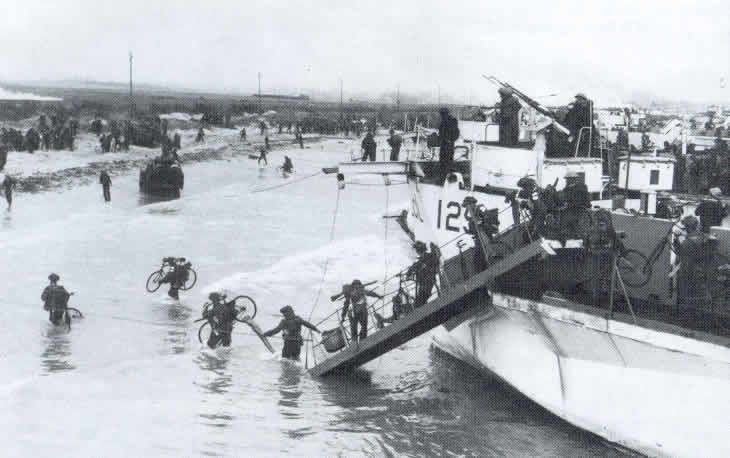 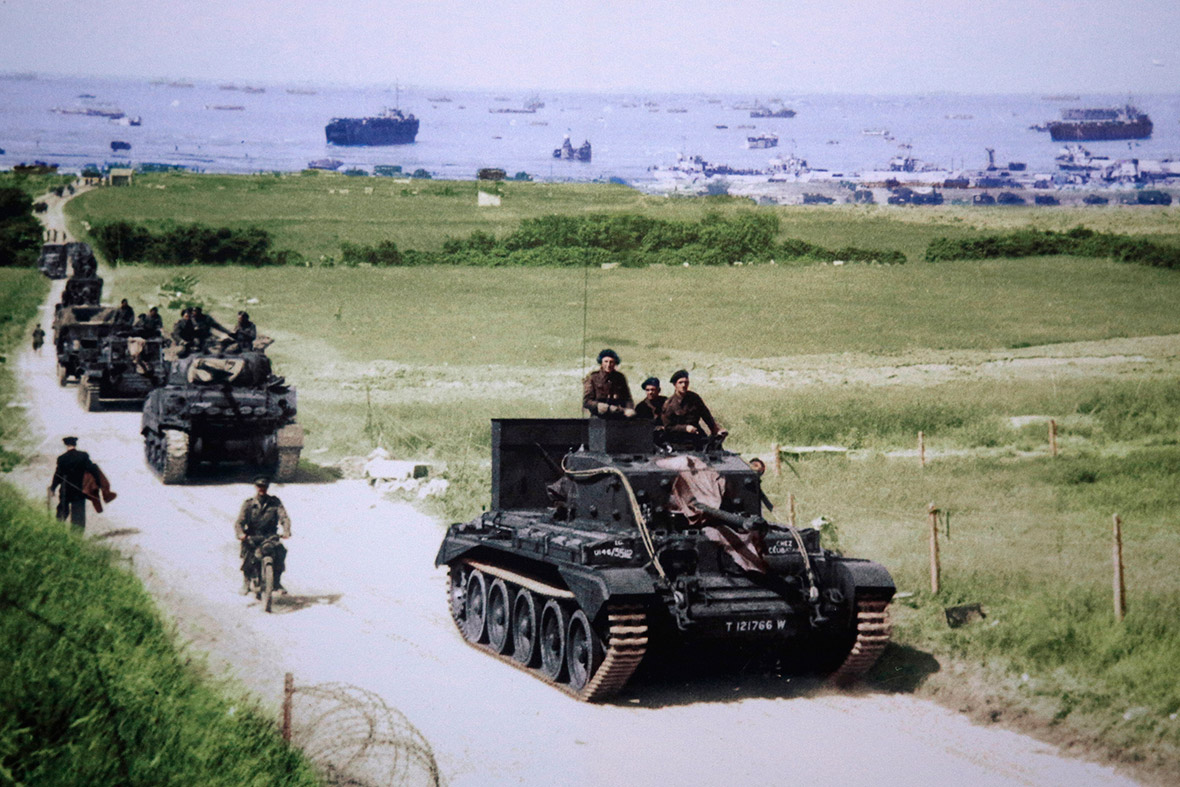 The Canadian tanks sink into land.

In the absence of evidence and in the absence of confession, Mme Vico is freed from the claws of the Gestapo by the Red Cross. She is able to return to the Abbey, completely in ruins, with her two youngest children and her son Jean-Marie, a Resistance fighter whose mission concluded with the liberation of Caen.

During this time, the others remain in a difficult position: the elder M. Vico having been deported and Jacqueline, a Resistance fighter in Paris, still detained, Jacques enlisted in the Leclerc division to continue the Allies’ onward pursuit.

The remaining family members take up residence in the part of the attic which looks onto the little park.

Canadian Sergeant Dudka came back to the farm and told them how, taken prisoner with other soldiers, he managed to escape through the small door known as the Bayeux door. “I have seen bodies,” he said.

The bodies of two German soldiers are discovered in the ruined buildings.

Although the little park had been spared the bombing, the 2 youngest children, Roland and Michel, notice that the soil at the foot of the small chestnut tree has been turned over. They dig and find the first body, lying face downwards, a bullet hole at the nape of the neck. It wore a military uniform.

Later Jean-Marie finds more bodies in the same position and places crosses on the sites.

Mme Vico notices that the snowdrops surrounding the lawn of the little park are growing in a disorderly manner even though the rest of the lawn has regained its original aspect. Puzzled, she asks her sons to dig. Four more bodies are found.

Her other son Jacques of the Leclerc Division comes home on leave. Wishing to pursue a more systematic method to aid in the discovery of bodies, he asks a dowser, Father Gab, to search the whole grounds. The last bodies are found.

The British Authorities identify the bodies, which are then given the graves they deserve in the cemeteries of Bény-sur-mer and Cintheaux.

There were twenty of them. Twelve belonged to the NNSH (North Nova Scotia Highlanders), 6 to the Sherbrooke Fusiliers Regiment 27 CAR (Canadian Armoured Regiment) and two were from the Douglas Stormont and Glengarry Highlanders.

An eyewitness, a young Pole named Jesionek who had been recruited by force when he was 16, recounts his story of the dramatic events. The touching story of this young deserter deeply moves Jacques and Jean-Marie.

He relates the questioning he underwent and repeats all that he had heard. Finally he reports the executions.

All that the bodies had revealed is now clarified.

The Canadian Authorities conduct an inquiry among the German soldiers who could have known something about the incidents. Their accounts match up with the Pole’s.

The file is complete and is overwhelmingly against General Kurt Meyer. 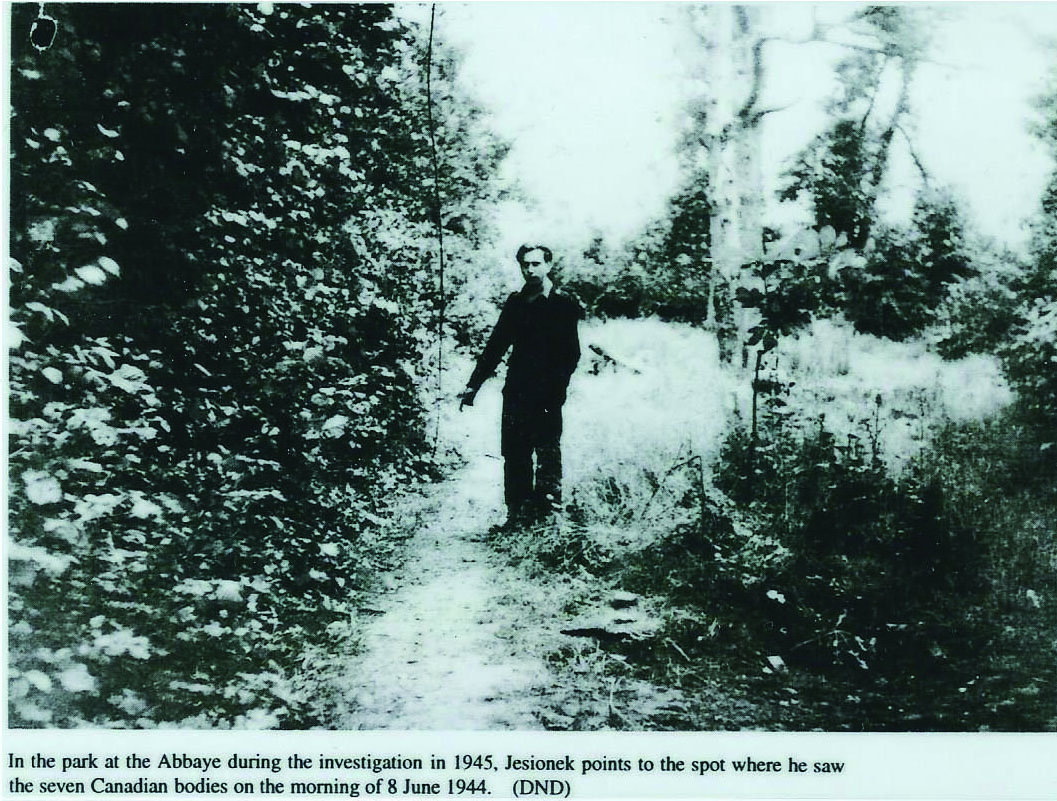 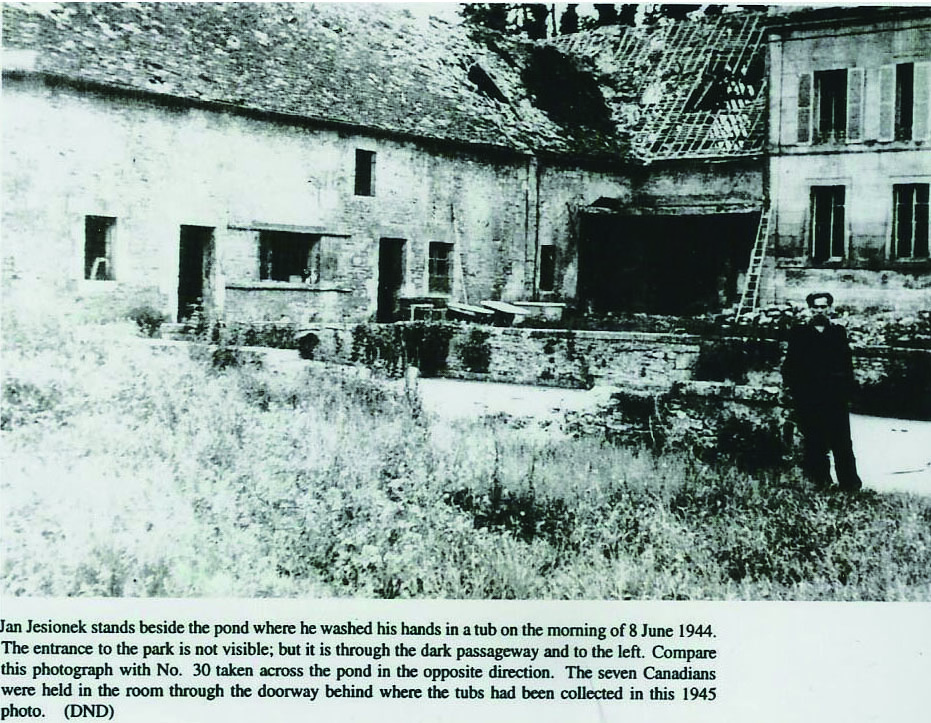 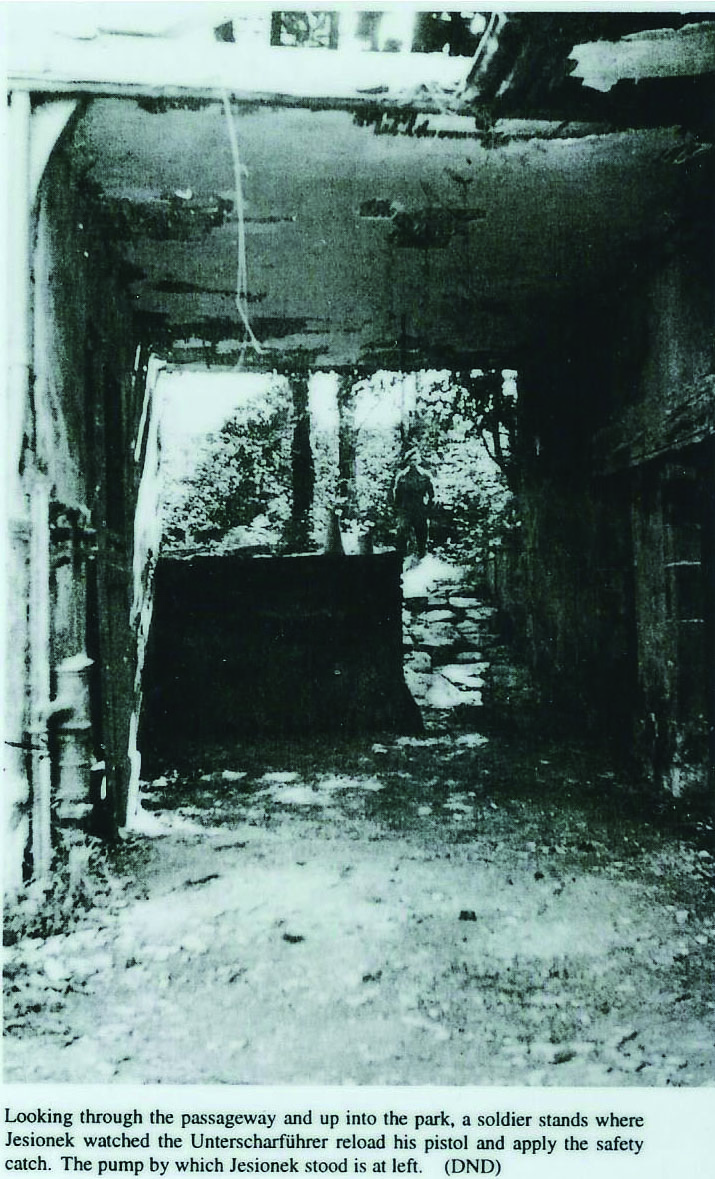 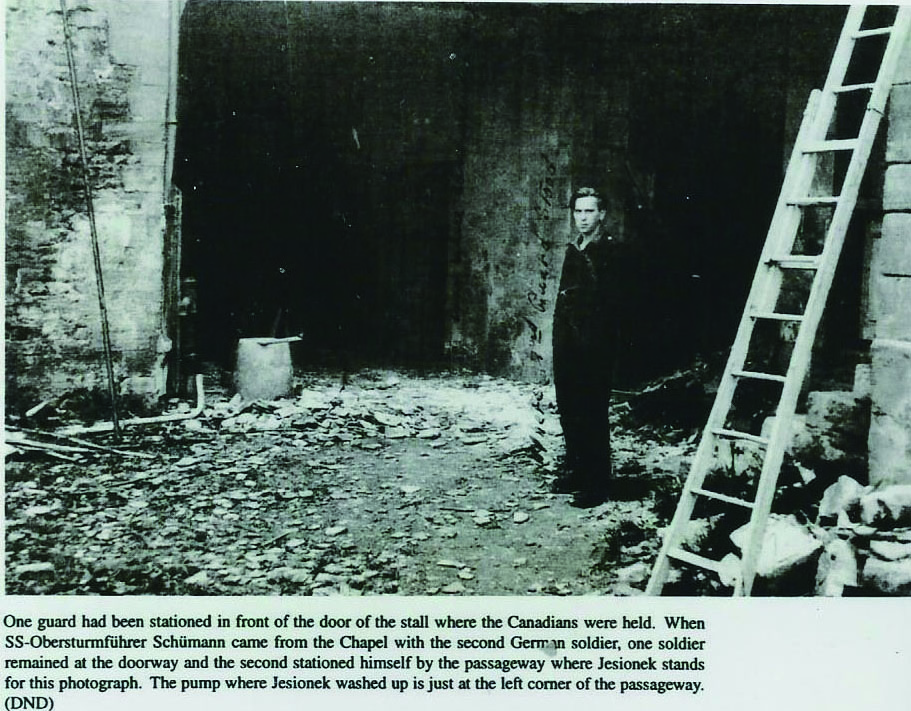 General Kurt Meyer, present at the Abbey when these murders took place, is accused.

The Geneva Convention having been violated, the first trial of war criminals takes place in Aurich, Germany.

Several charges are held against him. He is accused of torturing and murdering war prisoners: there were summary executions, there were concealed bodies who had been buried without any respect, without any cross or any sign allowing them to be found.

Mme Vico and her son Jean-Marie are summoned as witnesses as well as Jesionek and others.

Kurt Meyer is found guilty and sentenced to death. That sentence is reduced to a prison sentence and to be served in Canada. 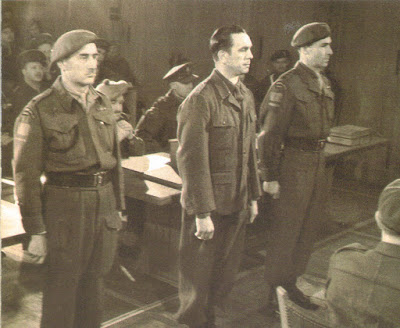 There is a general tendency towards reconciliation. Kurt Meyer is freed for good conduct on June 7th, 1954. He dies of cardiac arrest on December 23rd, 1961.